Natural gas (also called fossil gas; sometimes just gas) is a naturally occurring hydrocarbon gas mixture consisting of methane and commonly including varying amounts of other higher alkanes, and sometimes a small percentage of carbon dioxide, nitrogen, hydrogen sulfide, or helium. Natural gas is colorless and odorless, so a sulfur-smell is added for early detection of leaks. Natural gas is formed when layers of decomposing plant and animal matter are exposed to intense heat and pressure under the surface of the Earth over millions of years. The energy that the plants originally obtained from the sun is stored in the form of chemical bonds in the gas. Natural gas is a fossil fuel.

Natural gas is a non-renewable hydrocarbon used as a source of energy for heating, cooking, and electricity generation. It is also used as a fuel for vehicles and as a chemical feedstock in the manufacture of plastics and other commercially important organic chemicals.

Biogas, is a combustible gas primarily comprising of methane (CH4) in a proportion of 50-75% and carbon dioxide (CO2) in a proportion of 25-45%. Bio Gas is naturally produced from the organic wastes through the process of anaerobic decomposition. Biogas is then purified to remove unwanted gases like hydrogen sulphide (H2S), Carbon-dioxide (CO2) & water vapour. This purified biogas is compressed to form Compressed Bio Gas (CBG), a green & renewable automotive fuel!

Some examples of organic waste (feedstock) can be: 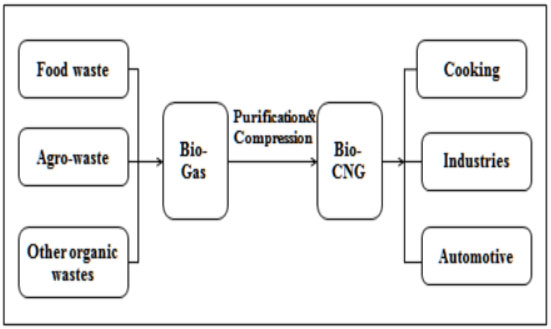 SATAT – AN INITIATIVE OF GOVERNMENT

SATAT stands for Sustainable Alternative Towards Affordable Transportation, it is an initiative launched by Ministry of Petroleum and Natural Gas (MoP&NG) on 1st October 2018 under National Policy on Biofuels 2018 by Shri Dharmendra Pradhan (Minister of Petroleum & Natural Gas and Minister of Steel) to set up & encourage production of CBG for use in vehicular sector to reduce polluting emissions and to promote the vision of Clean & Green India.

3. WHY IS CNG BETTER THAN OTHER FUELS?

As petrol (gasoline) and diesel prices increase, the need for a cleaner and less expensive alternative fuel becomes even more important. Here, compressed natural gas or CNG appears to be the viable option as an automotive fuel.

Here are the advantages CNG has over petroleum-based fuels: